Reduction as Concentration Reduction is an everyday act. We are familiar with it in industry and technology, as well as in speech. Saying everything in just a few words – an ideal already promulgated by the Spartans in Laconia in Ancient Greece - is the opposite of extreme verboseness. Our world is highly complex and unfathomable. The “reduction of complexity”, originally a term used in systems theory, is what we have to do every day in order to remain capable of functioning. We weigh things up. That means that either off-the-cuff or on reflection, we make decisions on the basis of just a few, for us, important variables. We filter details. Reducing leads to concentration. In other words: “Less is more”. In the Prado in Madrid there is a small, landscape-format painting by Titian: We see a diagonal cross, in the top left-hand corner the head of Joseph of Arimathea, beneath the Cross the head of Jesus and his hand holding the Cross. And Christ looks you directly in the face, you feel affected, would most of all like to run there and help. Otherwise there is absolutely nothing in the picture: no background, meaning no sky, not a single tree, not a single bird. There are no distracting details, which usually make it possible for you to gain a certain distance on things. There is no way out. It is this concentration on the little bit which is of importance that makes such a great impact. Pieter Claesz’ famous still-life in Rotterdam also displays this little bit of importance: just a herring, a glass of beer, and a piece of bread – in the 17th century the staple food of the Dutch. The seventh exhibition dedicated to “Reduction” (the first was in Berlin, the second in Cologne, the third in Frankfurt/Main, the fourth in Antwerp, the fifth in Berlin, and the sixth in Bonn) showcases different types of reduction. Rob Scholte turns round the embroidered pictures made by Dutch housewives and based on themes by Vermeer, and then signs and exhibits them. Choose, turn around, sign, exhibit – just like Duchamp did in 1917 with his urinal. There are just four stages to this method of working. The mural relief by Charlotte Posenenske (1930–1985) consists of a gray rectangle, which by means of a single diagonal fold (1966) projects into the surrounding space. Kirstin Arndt displays four identical, simple sheet steel brackets, white and standing upright, surrounded by light and a gentle shadow. Michael Reiter’s “jolly trellis” looks dematerialized: thin, geometrically configured, movable little tubes connected by a nylon thread. Cécile Dupaquier’s white “Tableaus” only stand out from the white wall through long, hardly noticeable bulges, into which they appear to disappear. On account of the compartmentalization, the use of different materials, the cracks in the surface and the multi-colors Henrik Eiben’s reliefs, on the other hand, are extremely complex. They seem reduced thanks to a specific stringency. Burkhard Brunn 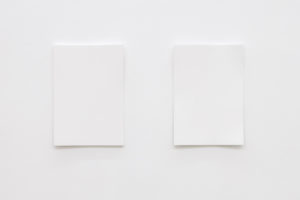 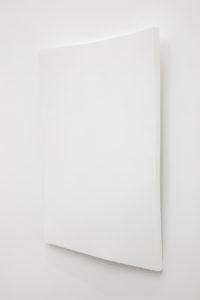 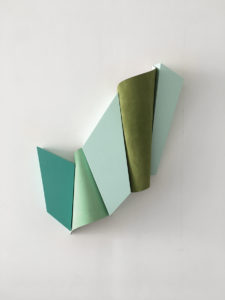